Who doesn’t love a snowed-in cabin in winter, especially if there’s a gorgeous, kind guy and a sweet puppy to share it with?

Keep reading to get a peek into When You Came, a Valentine’s Day novel set on Terrence Point mountain, with all of the above. 🙂

psst. I DO love Valentine’s Day. It celebrates…LOVE. And it’s a perfect day to cuddle up with a good read!

So to give you a cheer-up, and a picture into the world of Kaera, my academic-geek, curvy, anti-exercise, and anti-skiing heroine in my Valentine’s Day story (the one who’s thrown into the trendy and unfamiliar world of a newly opened ski resort in British Columbia, along with an event planner’s job), here’s an excerpt of the winter cabin scene.

When You Came
Chapter Twenty-Nine

Keara sat silently in the living-room, the embers of the dying fire behind her with Buddy still glued to her, laying at her feet.
Jake had come out of Sven’s bedroom–all tiny sweet puppy–as soon as they’d entered the cabin, overjoyed to see Buddy. As per his custom, Sven had left his bedroom door a tiny bit ajar. There’d been a bit of a doggy reunion, but she’d shushed them, kept them quiet for the most part, and the love and the tumbles were soon done, as they were both tired. Jake slowly pad-padded back to Sven’s bedroom…or bed, she thought, with a quick flush of heat. She’d grabbed a glass of wine—the tea or the nuker would’ve made too much noise—and thought. Tried to figure out the mess that had become her life.
Blaine knew where she was, the woman who had put his beloved first-born behind bars. He knew.
Blaine also knew where Buddy was, the animal he’d been single-mindedly after, and that so far, had also eluded his clutches. Would he come all the way to British Columbia to wreak his vengeance? That was the question.
She stared into the fire, heart numb, yet paining at the same time.
She didn’t have the answer.
The peaceful home she’d landed in seemed to envelop her, hold her in its gentle, yet protective caress.
Such a warm home. Not unsurprisingly, that of a military man. Life with him had felt safe here. Sheltered. Sure, it was temporary. At least she thought it was. Right? They weren’t an item, though she’d felt something when…
And no. She winced, pulled herself up, harshly. She’d been down that road before. “Don’t get ahead of yourself,” she muttered, the heat from the fading fire still gentle on her back.
And really, after Sven’s reaction the other night, there was no foundation at all to the thought of them becoming more. No matter how much they seemed to click and enjoy each other’s company, and he had no other woman in his life at the moment and she had no other man…
“Stop it.” 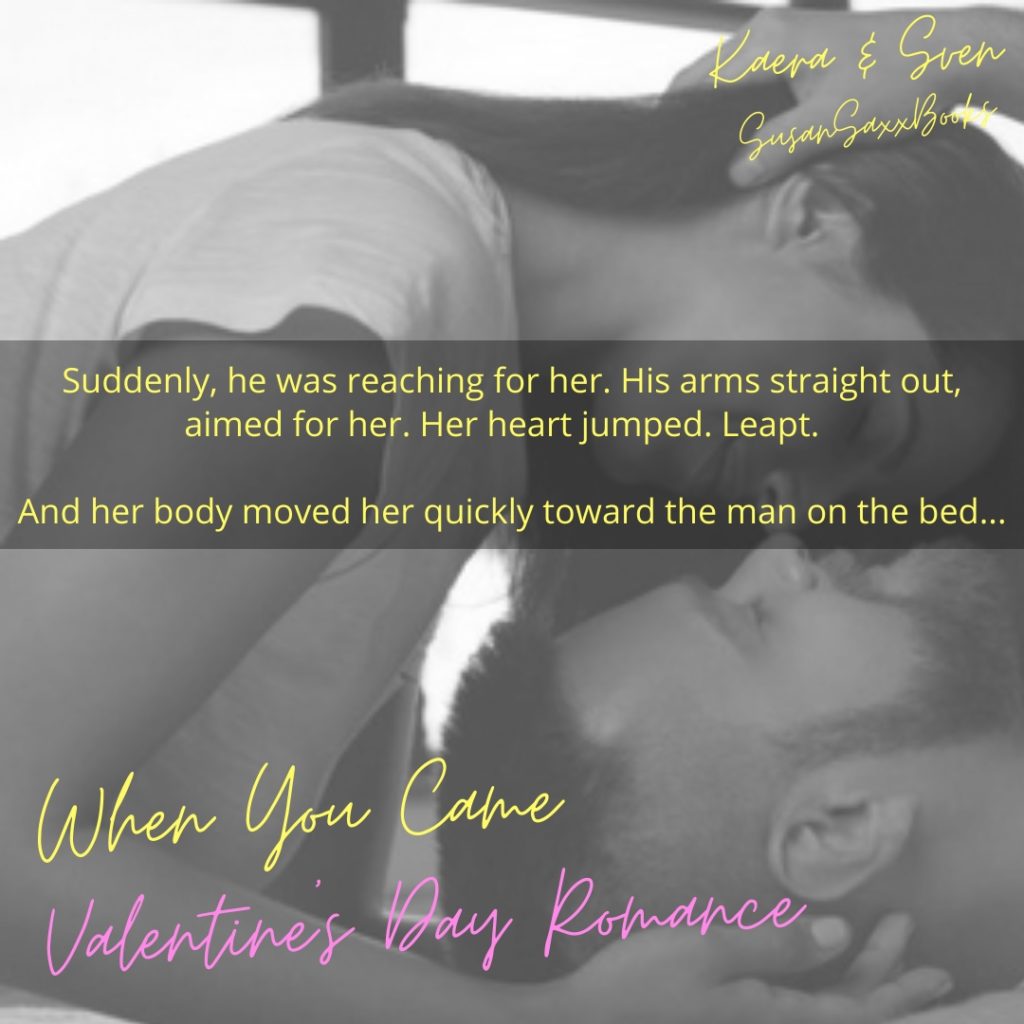 This time, she meant it. No fantasizing about stuff that could never happen.  Would never happen.
But it wasn’t hard to go on the next bit of the mental journey.
If Blaine showed up here…
And then, sweet little Jake interrupted. He stuck his nose out of the bedroom, once again. Stared at her a long moment, then pad-padded all the way back to her, as if he needed more than Sven, already. As if he’d missed her in the last ten minutes since he’d been out here.
He stepped around Buddy, managed to smash his little butt against the older dog’s face—who got a pained look—as he pulled himself up beside her and settled on her lap. Dropped his head on her leg, sighed deeply, let his eyelids close.
Oh hell. This was worse than she thought.She was putting them in danger. Both of them.
Sven was a man’s man. Strong, active. For crap’s sake, he was military reserve, plus ski patrol and he saved people’s lives routinely. He met more than the minimum physical requirement there, anyone with a functioning set of eyeballs knew that with one glance. Far exceeded it.
Only…he wasn’t a criminal. Didn’t think like a criminal.
And he had other worries on his mind. She’d seen it, the whole time she’d been there. He hadn’t confided in her what was going on, exactly. But he was under his own dark cloud, one  she saw he worked hard to come out from under.
It hit her with a thud. She knew the only option open to her. And it was a bloody lot earlier than she’d wanted to do the thing she had to. Regret swirled in her.
She’d thought she’d stay until there was a room at the resort, or until she found out if her employment was going to be extended. Then she’d find a place.
And that still would have given her a solid amount of days living with the blond ski patrol soldier and his sweet puppy, in the gorgeous mountains of British Columbia, in the snowy winter. Her own personal, snowed-in in a cabin, dream scenario.
They’d been a little family. But now…it was done.
Just like so many other parts of her life that had come and gone. Some she’d been happy to see go. This one…
Oh god, no. Her face contorted, in the last flickers of the dying firelight. She didn’t want to go. Not yet.
But they were more important than her heart was. Where it wanted to stay. Just a little longer.
She couldn’t hurt them. She couldn’t let them be abused, injured or worse—lose their lives, for something she’d done a long time ago. She’d already put Effie into danger. Possibly even Mrs. Epstelmeir, back in Toronto. That thought hadn’t been lost on her. 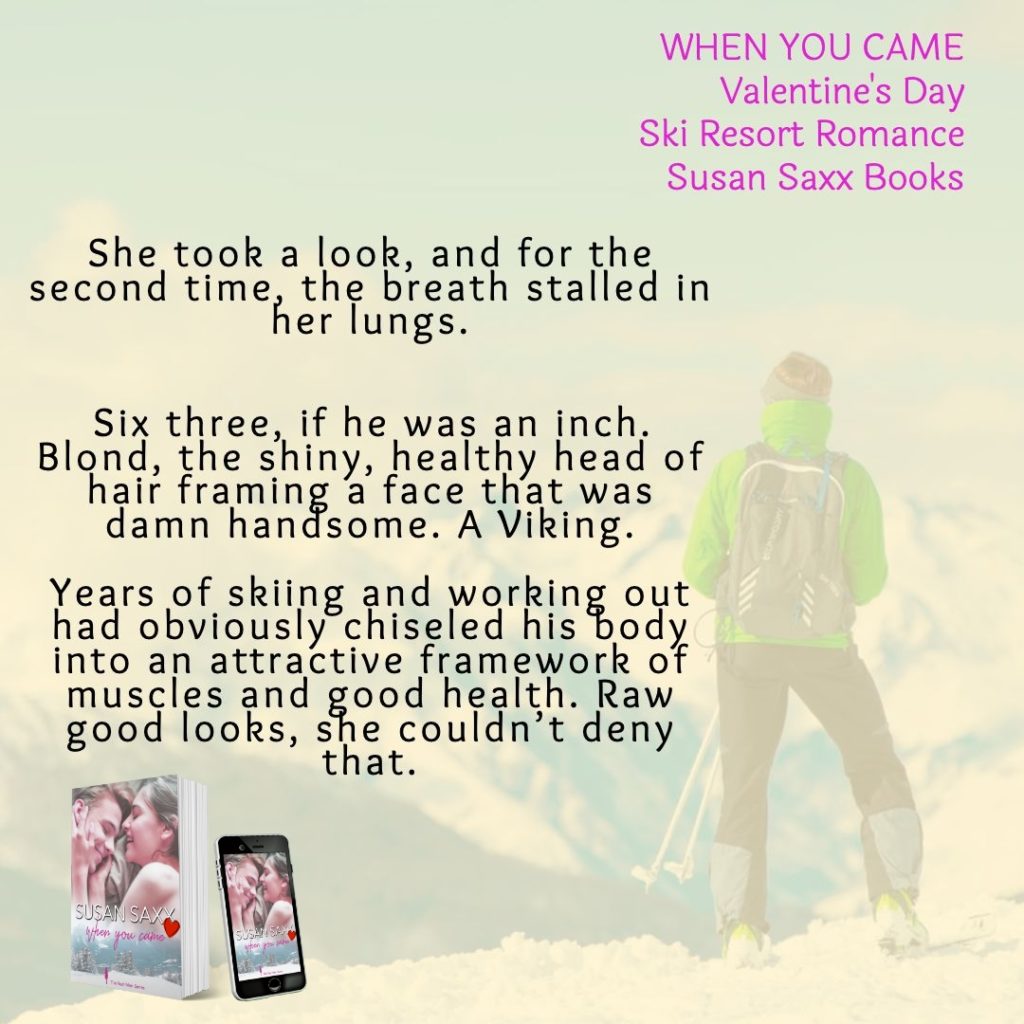 There was way too much collateral damage going on, and all…because of her. The line? She was drawing it here.
She was drawing it here.
But she couldn’t go without seeing Sven one last time. Without talking to him. Seeing the soft light, the genuine caring for her, in those intelligent, sky-blue eyes.
Oh, god. She crumpled before the now dead fire onto the side of the big chair, and wept. Jake woke, shuddered and stared at her, then jumped down on wobbly, little puppy legs  and was gone.
The tears flowed as the emotions tumbled from her. Quietly, but her Buddy, still laying in front of her, stalwart, knew something was so very wrong.
And even her gallant furry guardian didn’t know what to do to ease his beloved mistress’s pain. He laid his soft chin on her foot, the weight telling her pointedly and not for the first time, that she  wasn’t all alone. He was there to protect her, to make sure nothing bad would ever happen to her, ever. He’d done that in Toronto, like a champ. Like the finest bodyguard. When she’d had no one else.
But despite all that, soon, they’d both be on their own again, trying to make their way in an unfriendly and hostile world.