It Started On A Back Road 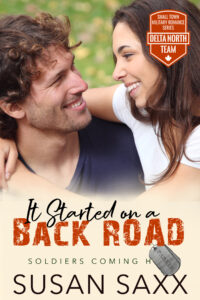 He’s a soldier, bound by rules.
She’s an artist, dying for freedom.

Danica needs to get away from her life in the Big Apple. So when she visits her best friend Abby in the northern town of Jack’s Bay, she expects peace and quiet. But she gets anything but. She finds herself smack in the middle of a bunch of former Delta North soldiers. She’s good with all of them…except for Parker Bowles.

Parker Bowles has a heart as big as the northern Ontario outdoors he loves so much. The former Special Ops soldier is perplexed at the small woman’s reaction to him. Yet something about her draws him. He can’t help but keep a special eye on the lonely, yet unpredictable Danica from NY—no matter what she says. Or does.

But when her actions take a surprise turn, he’ll have to follow his heart. Despite the rules…