A Real Man: The Last Miracle

Book 2 of the Miracle Duet, the Delta North Series Opener

The couple that started it all – Cole & Tabby! Their full story  in two full-length sizzling, heart-breaking, and joyous novels!
‘So many readers asked for Tabby & Cole’s full story – I listened. Thank you, dear readers, for the nudge! :)’ ~Susan 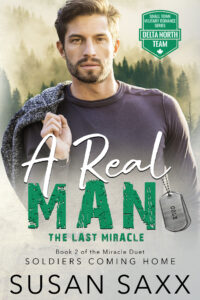 They thought they had it all.

Dawson Ridges had been his home all his life, but when Tabby Grey came...

…it became all the richer. Cole Dawson, former platoon leader of the elite and feared Delta North Team, knew she was the woman for him. Fierce, independent, determined, yet with the type of heart deep down he’d never seen before. Tabby was special…and he was going to spend the rest of his life proving it to her.

The man was a dream come true. Stalwart, principled to a fault, off the charts sexy, yet he only had eyes for her. Soldier, rancher, cowboy, a community leader caring for the whole Dawson Ridges area…now her man. An abandoned waif, fighting for her way in the world, with a horribly discolored face, she’d found her home.

Yet the winds of change and upheaval are stirring at Dawson Ridges. Evil intent toward the ranch, its animals and all of the hands becomes apparent, and grows stronger.

…will Tabby and Cole’s happily ever after last?

“Susan Saxx…writes with heart and soul and never disappoints”