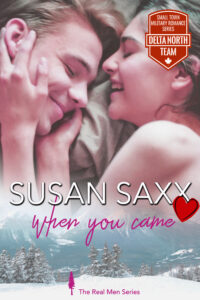 This curvy babe is SO over romance.
But the hot ex-Delta North Soldier is not…

Ex-Delta North Special Ops soldier Sven Golden works as a first responder for the Canadian Ski Patrol, saving lives and training avalanche dogs in stunning British Columbia on Canada’s West Coast.  But after he’s forced to take the harrowing new management job at Snowy Peaks Ski Chalet, things go downhill. And when he’s assigned to be chief event planner for the Valentine’s Day Extravaganza instead of working the slopes, he’s had enough.

Then he meets organizational whiz Keara Linn, desperate for the 2-week temp job as his assistant. Yet, things don’t add up. Plain, decidedly curvy, smart and focused, he can tell she’s hiding something. And it’s big.

But the passion and heart she’s buried deep within her finally explodes his world. Now nothing is going to shut that down—or his feelings. Not even a crazed madman who is determined to wreak revenge on Keara and her guardian dog, the one she loves with all her heart.

And when it’s time? The whole quirky Terrence Point community will have something to say…about everything.

Note: When You Came was originally published in the Real Men Series. This is a rewritten, lengthier, and  hotter version.