A Real Man: The Dream 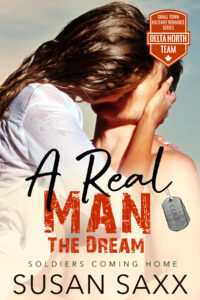 A sexy, incredibly hands-on dream. But still, a dream.

Cole Dawson, former leader of the feared Delta North Special Ops  Team, has returned to save the family ranch. Also? To be this woman’s bodyguard. This compelling, sexy, can’t get her out of his head woman.

She doesn’t know quite which way to turn. What action to take.  Yet, it seems her heart does…

*This is a revised and rewritten version of the orginal first book in the Real Men Series, which was titled A Real Man. The series is now known as the Delta North Team Small Town Military Romance series.