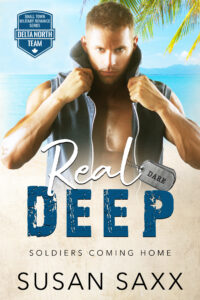 Second chances don’t usually come around again, except in fairy tales, and Abby Haines knows that all too well. A former rich girl, she’s now working crazy hard to claw her way up in the world, all alone. Penniless and tossed out by her snooty parents for her career choice, it’s hard. The last person she wants to see on the deserted island in the middle of a photo shoot is him, the past lover from the wrong side of the tracks. The former love of her life, now her sworn enemy.

He’d better stay out of my damn way. There’s going to be no enemies to lovers crap here. Though the enemies part is pretty well carved in stone…

She’d been the light of his life. But their previously forbidden love, full of class issues as well as his own insecurities, led him to poor choices. As did being a young, crazily in love, stupid young buck. Now? He’s smartened up, and redemption is on the table.

With the strength of his military unit and the camaraderie of his Delta North Team band of brothers behind him, Dare Logan now has an agenda. He’s learned what it means to be a man. But can he make their unexpected reunion count for forever when she won’t even talk to him, and the sight of her still punches him in the gut?