Sven and Keara have had definite sizzle and heat between them. Working together, AND living in his cabin, for the moment, have all added to it.

But when his old, gorgeous ex girlfriend showed up the other day….

Sven and Keara strode into the ski chalet early the next morning, dogs in tow. It was Day One of the Valentine’s Day Extravaganza.
But the mood was decidedly different than just a short twenty-four hours ago. Hell.
He’d worked late the night before. Keara and Buddy had stayed with him too, because of the still present danger of Blaine, or a crony of his, finding her at the cabin. He’d been adamant on that, and there’d been no disagreement.
But after that mess of a reunion with Tara Lynn? He’d sought Keara out. He’d caught up to her where he’d first given her hell, more than a week ago, in the unfinished bit of the resort, back in the deserted area.
This time it felt like it was him that was dancing fast to give an answer that would make sense. How the tables had turned, and through no fault of his own. “Keara,” he’d said, imploring her with his eyes.
There was nothing between them, officially. No promises.
But hell, there was something between them. There could be something between them. The more time he spent with her, the more he knew there could be. Something.
He didn’t dare analyze what that something could be, but it floated in his soul daily. He knew what he felt, more and more, every day.
Peace. Trust. Enjoyment. The knowledge he could entrust her with whatever was heavy on his mind. Or light. And she’d know how to handle it. Would give it the respect or importance it deserved.
And more? The spark–the solid beginnings of a firestorm—whenever he saw her and didn’t curate it, or force it down.
A sexual firestorm. It slapped the breath from his lungs, at a moment’s notice.
Crazy Keara. Crazy, spreadsheet-loving, animal-protecting, mental superstar, Keara. Dear God. He had a thing for her. And it was becoming harder to deny, every damn day. 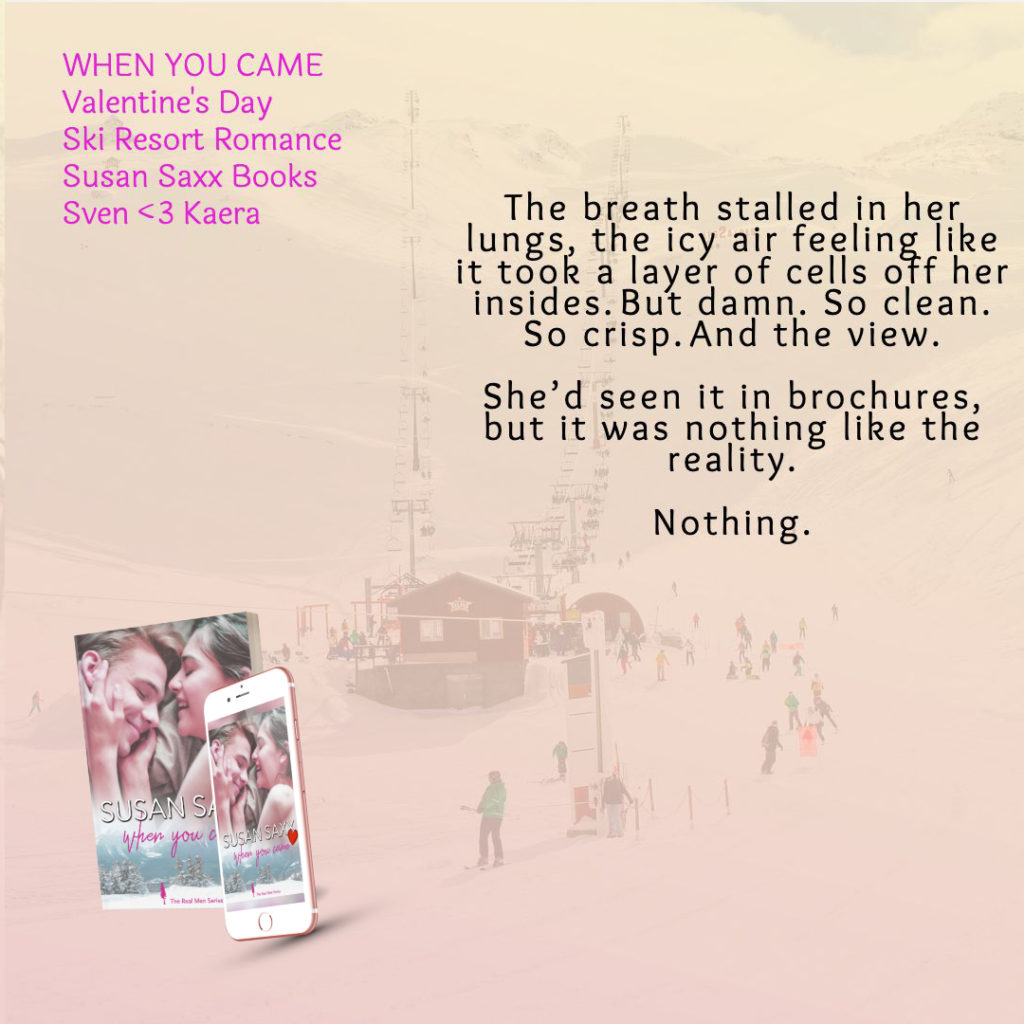 It was scary. Despite the fact she was currently his employee, and under him—and not in the good way–there was a little voice in him telling him to take note. This could be the big one.
Relationships. Love. All scary, all the time.
It had been scary when he was five, and it hadn’t changed one iota now that he was almost twenty-seven.
But wasn’t that what they were celebrating right now, at the chalet? Sure, the Valentine’s Day event was a commercial thing, got people into the chalet. But everything they were doing, all the events and the celebrations at the chalet right now, were about love. The real thing. Heart.
Of which Keara had a lot. Not for nonsense or frippery, but for the real thing. He could see that in a blinding snowstorm at twenty paces.
The woman had heart.
But he’d had to do some scrambling to not have his Maid Marian push him, definitively and for good, out of the highest turret on the castle during that talk.
“The woman is delusional. She sent me a couple of texts, but I barely responded. Then she shows up here.” He’d reddened, but continued urgently. “Then she lays that lip-lock on me.”
“And a very nice lip-lock it was too.”
He snorted. “It sucked the oxygen out of me, more like.” His damn lips were still vibrating, and not in a good way.
He thought it was evident that that was not good, but she responded by looking at him quizzically. “Well, some of the lip-locks I’ve had, that’s been a definite side effect. Quite an exhilarating one actually. I don’t actually remember minding at the time.”
Oh dear crap, now they were discussing her sexual forays? He hastened to set her straight. “I have no intention of spending any time with her. She’s the past, and that’s where she’ll stay. Not my type.”
Keara had raised her eyebrows at that. “Okay. But all I know is that last time we stood in this spot, we were discussing the Guinness book of records because of some of my, ah, feats. This time?” Her gaze had turned stony, especially as they’d discussed that kiss. “We could be discussing yours.”
And she’d stalked out ahead of him.
What else could go wrong?
He shouldn’t have tempted fate. His phone rang. Jonas. “Hey, Buddy. How’s it going?”
“Okay. Listen. Are you coming?”
His heart sank, and in that moment, he couldn’t bear to answer. “Nothing’s picking up? How about the new volunteers?”
“They were sent elsewhere. We need you, man. You. Someone who knows what the hell they’re doing.”
“What are you behind in?” The watch station cared for great areas that were out of bounds, not curated by resorts. Critical areas, so no one would be hurt. Plus it shared information with the resorts and others. His spirit was suddenly with them, on Terrence Point, in the cold and brittle wind.
“We need someone to go out and ski the fracture lines. We’ve been studying the snowpack, but not as thoroughly as we should. And that damn unit. We got it up, but it crashed again, and you won’t believe.”
“What?”
“Lost the data Rembrandt and Holt collected. Fools put it in the new program.”
“Shit. Don’t you have backup?”
“Thing is so whacked, it crashed before the backup kicked in. Can’t blame them, honestly. They thought they were getting ahead, inputting the data there. Stayed late to do it.” His voice was strained. “It’s like we’re really and truly fucked. The Perfect Storm.” He paused. “Are you sure you can’t come?”
Visions of tubs of red icing danced in his head. Glittery curtains that needed to be hung and checked for the right length. Sound equipment that needed to be vetted for a lame, stupid party.
Of course, that was all more important than lives. Or agreements, even if verbal.
“Sorry. Apparently, I’m critically needed here, and no one on the entire planet can fill my spot. The trained orangutan and the eleven-year-olds are busy.”
He was angry. And wondered just how long his fuse would continue to last. Usually, it was pretty long. But he had the feeling it was quickly running out of length.
“Well, If anything changes, get that sweet ass over here.”
“Sweet ass listening, and will obey, if at all possible.”
He hung up, and his dark mood deepened.
Now, he thought, as he looked at the table set up in the lobby, beautifully decorated in pinks and reds and cream, the Valentine’s Day Extravaganza was about to start.
He watched as Edna and Harold trudged into the chalet, and look! Old man Jones too. Now that was a surprise. The grizzly old-timer rarely came down from the mountain. He wondered just how they’d gotten him here.
But all of this would usually have been fun. The Snowy Peaks staff were unbeatable, with a great spirit among them. And when the seniors came? It got all the more interesting. And with Keara there too? It would have been a gas.
But with all the cheer and goodwill they were working hard to create, there was still one ominous truth he had to remember.
He should be, right now, on the slopes at the volunteer station, ensuring no lives would be lost on these next few days that celebrated love and life.
And even by staying here, swallowing his anger and towing the line, Williams-style…
Both his and Keara’s jobs were still on the line.