Have you ever wanted to hang out at a snowy mountain ski resort?

More, in the company of a blond, handsome and hunky Ski Patrol first responder? 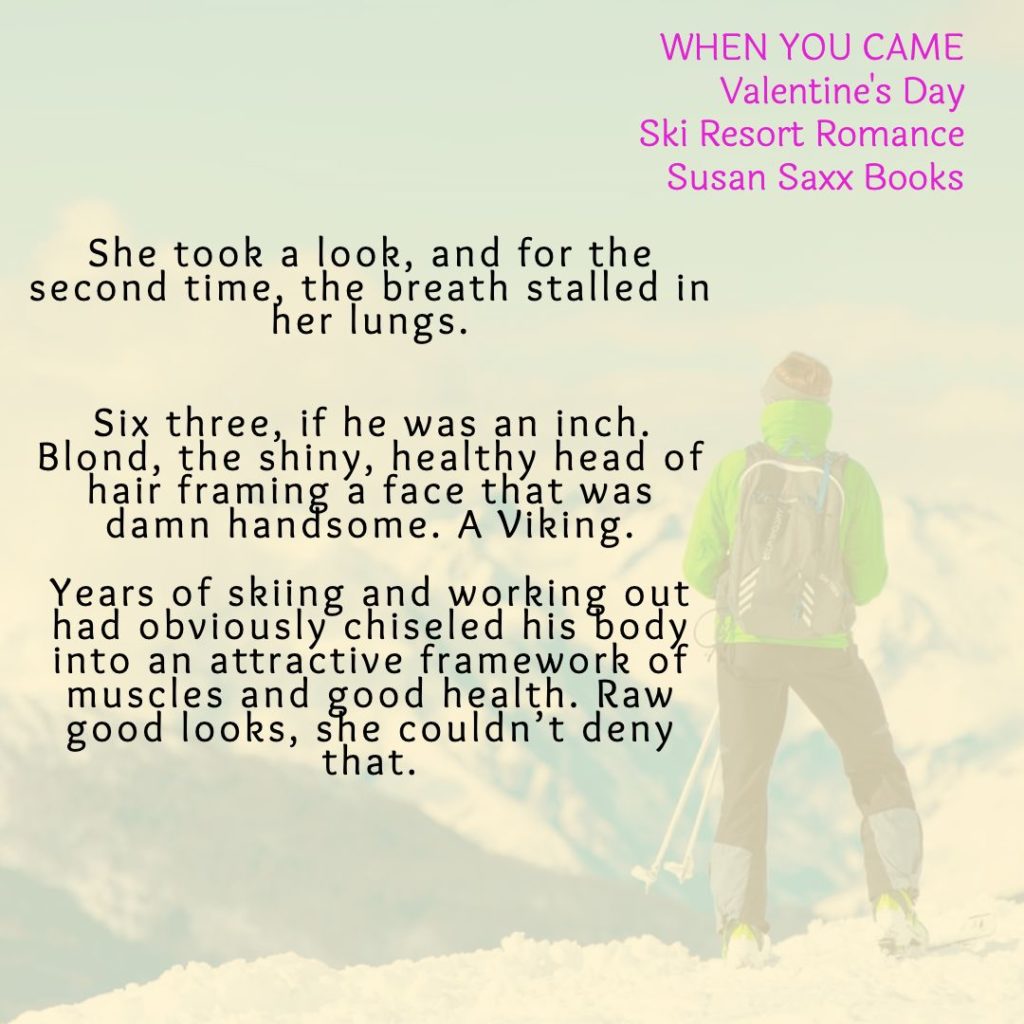 In my full-length novel When You Came (part of the connected REAL MEN series),  the curvy, very plain-Jane academic geek Keara,  is forced into a job at a newly opened ski resort in the mountains of British Columbia.  This woman, though (who hates skiing), has BIG problems on her mind.  Wants nothing to do with skiing, or inane pursuits like that. She has an agenda. It’s time-sensitive, and really…it’s critically important.

Yet it doesn’t help she’s forced to work with a nordic god ski patroller. Who’s her boss. Who, if she let it, makes her blood race.

Yeah, like that’s gonna happen. Ha. Not with this extra weight on me.

But things are not always what they seem. Let’s pull the curtain aside and peek into what’s happening at Snowy Peaks on Terrence Point mountain, Canada, this snowy February morning, right now….

Sven and Keara strode into the ski chalet early the next morning, dogs in tow. It was Day One of the Valentine’s Day Extravaganza.

But the mood was decidedly different than just a short twenty-four hours ago. Hell.

He’d worked late the night before. Keara and Buddy had stayed with him too, because of the still present danger of Blaine, or a crony of his, finding her at the cabin. He’d been adamant on that, and there’d been no disagreement.

But after that mess of a reunion with Tara Lynn? He’d sought Keara out. He’d caught up to her where he’d first given her hell, more than a week ago, in the unfinished bit of the resort, back in the deserted area.

This time it felt like it was him that was dancing fast to give an answer that would make sense. How the tables had turned, and through no fault of his own. “Keara,” he’d said, imploring her with his eyes.
There was nothing between them, officially. No promises.

He didn’t dare analyze what that something could be, but it floated in his soul daily. He knew what he felt, more and more, every day.

Peace. Trust. Enjoyment. The knowledge he could entrust her with whatever was heavy on his mind. Or light. And she’d know how to handle it. Would give it the respect or importance it deserved.

And more? The spark—the solid beginnings of a firestorm—whenever he saw her and didn’t curate it, or force it down.

A sexual firestorm.  It slapped the breath from his lungs, at a moment’s notice.

Crazy Keara. Crazy, spreadsheet-loving, animal-protecting, mental superstar, Keara. Dear God. He had a thing for her. And it was becoming harder to deny, every damn day.

It was scary. Despite the fact she was currently his employee, and under him—and not in the good way–there was a little voice in him telling him to take note. This could be the big one.

Relationships. Love. All scary, all the time.

It had been scary when he was five, and it hadn’t changed one iota now that he was twenty-seven.

to find out what happens with Sven, Keara AND their two dogs Jake & Buddy (and the whole darn Snowy Peaks Ski Resort gang…)

and Happy Valentine’s Day, from ME!